“It’s the perfect size and looks so pretty at the same time!”

I had been looking for a small greenhouse for quite some time. I only have a small garden which is approximately 10m x 3m, with the area for the greenhouse measuring about 3m x 3m. It already houses my bins and small shed, so a small area with lots competing for space!

In my research on small greenhouses, my choice was limited to a mini one or a lean-to style. I’d found Forest Garden products while looking for Victorian style small greenhouses and had almost settled on their Victorian Tall Wall Greenhouse………then I stumbled across their new Victorian Walkaround Greenhouse! It was like it had been made especially with me in mind!!

The order process was very easy. Communication by email was very efficient & I was able to choose my delivery date & when I had a question about times on that date, it was answered almost instantly.

The delivery of my greenhouse was pretty much perfect! I was contacted by text the day before with a time slot, then the delivery driver rang me to say he was 40 minutes away. He arrived within 5 minutes of his estimated arrival! I helped unload, all very straight forward, but if I’d been unable to help, it could have been done on his own.

Assembly was straight forward enough. It will definitely require two people, as just slightly too big to do single handed. Luckily for me I had my brother to help! As well as being well over 6’ (I’m only just 5’!) he is very handy with a screwdriver & good at DIY! I’m not totally incapable, but help from someone with reasonable DIY skills would definitely help.

In hindsight we needed to have made the roof batten more level initially, as when it came to putting the top roof batten on, we had to tweak things for it to sit flat. Obviously, a level base is very important for the doors to open and close consistently.

The greenhouse is very pretty as it is, but the image I had in my head, it would be painted. I think you can make it a bit more personal with colours!

I contacted Forest Garden in regards to painting it, as I wasn’t sure if it needed to be weathered first, but was assured that it had lived outside and this meant it already was.

It was also suggested that I painted it before being assembled to make life easier, but I decided that as space was so limited in my garden and that I only had my brother’s help for a short time, it would have to be painted once together! Although this was fine, if you can I would paint it before assembly. I left all the protective film on too while painting.

I went with Cuprinol garden paint in Pale Jasmine and Fresh Rosemary, as it was easy to get hold of locally. I used the white (Pale Jasmine) as the main colour and accented it with the green (Fresh Rosemary). I love how the white brightens it up, although a darker colour may look fresher longer, time with tell!? I also thought they were traditional ‘ish’ colours used for Victorian style greenhouses? I like the combination anyway!

As I have mentioned, my garden is very small. My thought behind getting a greenhouse wasn’t for growing veg as most people might, but more for propagating plants and growing my own ready for spring, to put in various pots and borders, rather than having to buy them. Especially bee friendly ones!

The far end of my garden on the old railway sleepers gets the sun till late afternoon.  This is where I chose to put my greenhouse. This allows me to see it from the back door and my bedroom window! It may look like an odd angle to position it, but with it straight up against the wall I only see it head on. The angle I have it on allows a ¾ view and I can see more of it!

I’m really thrilled with my little greenhouse! It’s the exact style I was looking for and as a novice gardener who is just playing at growing things, it’s the perfect size and looks so pretty at the same time! I’m looking forward to next spring already, when it will be full of plants!

The communication and encouragement I’ve received from Forest Garden has made this a really enjoyable experience! 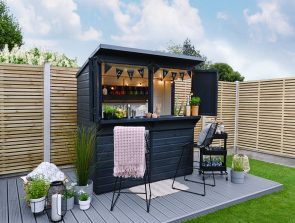 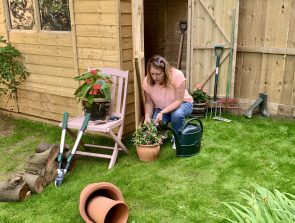 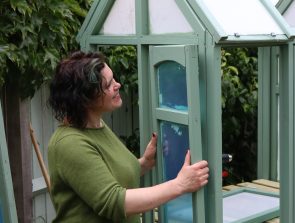 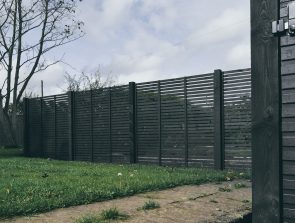 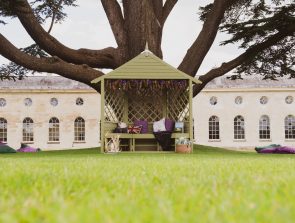 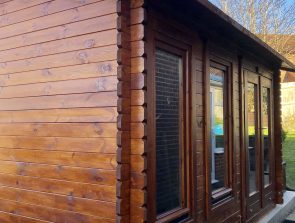 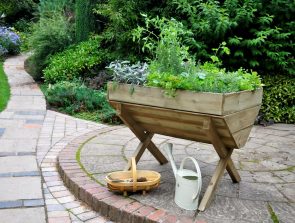 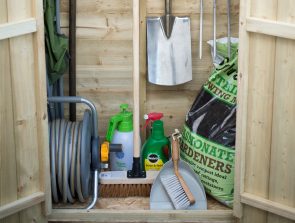 Winter Storage Ideas for the Garden

In response to COVID-19 we have introduced strict health and safety measures to protect our employees and customers - Help & Support .  In order to meet these measures, we are currently offering a core range of products – please check with recommended retailers for stock levels. We are also experiencing unprecedented levels of demand so it is taking us a little longer to respond to your enquiries. To purchase a Forest product please visit  Buy Online or Buy In-Store. Dismiss